One of the simplest tools today, the screwdriver, is widely considered to be one of the most important innovations in tool history. Although today we have more modern and powerful cordless drills to make our work even easier, the usefulness and importance of the screwdriver is still unmatched. Decades ago these types of screwdrivers were a staple in every handyman’s toolkit and that statement still holds true today. This simple tool, a metal rod with a shaped head, made to fit nicely into a screw head, is what separates it from the wrench family. There’s many screwdriver types, but 6 shapes are most common today.

There’s many screwdriver types, but for 99% of people these 6 common ones are all you’ll ever need to know.

This is one of the oldest screwdriver types we know. It came into use during 15th century Europe and remains widely used worldwide today. It’s characteristics are true to it’s name – A metal rod leading to a flat tip on it’s end. These are best for manual drives, since it’s more privy to cam out when it’s power-driven (compared to other screw heads).

What does Cam Out mean?
Cam out (or Camming out) refers to a screwdriver slipping of the screw heads surface. This can be because of too much torque or because the screw isn’t centered properly. When something ‘cams out’ it often damages the tip of the screw diver or the head of the screw.

There are two main types of flat heads you’ll find:

The Philips screwdriver was introduced in the early 19th century and has since taken over as the most common screwdriver today. This now common shape was an important and much needed upgrade during it’s day, allowing screws to be more accurate and precise.

A Pozridriv Screwdriver is recognizable by it’s double-cross, one Phillips cross with another cross over-layed and offset by 45 degrees. This design is widely used in Europe, but not so common in America. It’s more stable than Phillips and are used in situations that need more powerful torque for tightening a screw. They still cam out, but not as often as slotted and Phillips screwdrivers.

Torx screwdrivers, often referred to as star tip screwdrivers, have been on the rise in popularity in recent years. Their 6 rounded lobes have a great number of benefits. Not only does it increase the longevity of the screws and screw heads, but the design allows for the most amount of torque when compared to the other types in this list. There’s a 0% chance of tool slippage (I like those odds!) which make it a great choice for screwdrivers and power tools because of it’s reliability.

Named after an esteemed Canadian inventor, the Robertson is easily recognized by it’s unique tapered square tip. There’s no other protrusions involved in the shape, it’s head is simply a flat and square. This shape is highly reliable and great for production as having no angles means no cam effect. They’re widely used in North America, but not so much in European countries.

Loose hex bolts, nuts and screws beware. The Hex screwdriver is used for bolts, not screws, and features a recessed tip rather than protrusions like the other mentioned screwdriver types. The recessed hex tip means nuts and bolts fit into it, so no chance of slippage. This is great for production lines since it can go at high speeds with little error. This is also why it works well with power tools.

How to Use a Screwdriver – A Beginners Guide

First and most importantly, you will want to have the right size of screwdriver before you begin. There are 4 common sizes of Phillips heads which range from 0 to 4. Naturally, 0 is the smallest and 4 is the largest. Though most often you’ll come across sizes 1 and 2, which fit most standard size screws (2) and electronics and jewelry (1).

Flat head (Slotted) screwdriver types are different, measured by fractions of an inch. So before you begin, just make sure the screwdriver fits the screw head properly.

Thankfully, the secret technique to how to use a screwdriver is very easy. Fit the screwdriver into the matching screw head, apply inward pressure on the screw, and start turning. Remember the saying “Righty-tight, lefty-loosey”. So turn right (clockwise) to tighten and left (counter clockwise) to loosen.

Parts of a Screwdriver

There are three basic parts of a screwdriver: the handle, the shank, and the head. Some consider the tip (the tip of the metal head) as being it’s own part of a screwdriver, so there’s actually 4 parts.

Screwdriver Safety and Cam Out

As I mentioned at the beginning of the article, some screwdriver types (like Phillips) are constructed to cam out. This is a double-edge sword. While it is actually a feature to avoid over-tightening, it also can strip the screw head.

A stripped screw head may become unusable and need additional tools to get it out. You may have to drill a hole through it with different types of drill bits or use a more powerful tool like a cordless hammer drill. As for using a screwdriver safely, remember its a sharp pointed object. It’s very possible to cut or pierce skin fairly easily, so always handle it with care to avoid getting hurt.

This article has covered everything you need know about the 6 most common screwdriver types to how to use a screwdriver safely. Hopefully you’ve learned something new during your time here, don’t forget to share and leave a comment if you have any questions or additional knowledge you’d like to add. 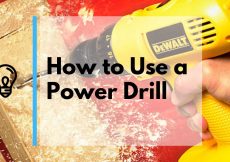